Schedule a meeting with us to know more about our offerings 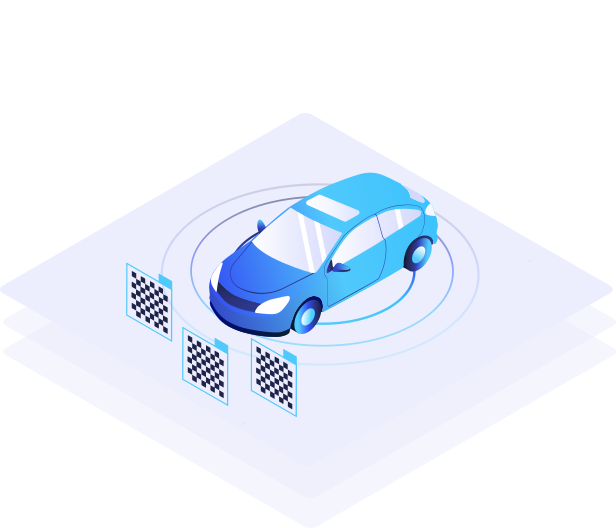 Sensors are a crucial part of autonomous vehicles, drone navigation, localisation, mapping, manufacturing and various other robotics applications. In order to extend the field of view and procure appropriate depth information of the environment, multiple sensors are mounted on the machines. Software tools fuse the information from multiple sensors together using sensor calibration parameters. Hence, sufficiently high accuracy of sensor calibration is required for high-quality sensor fusion leading to perfect perception models.

We showcase the efficiency of the optimiser’s algorithm using an experiment conducted in a simulated environment. We construct an environment with three camera sensors pointing towards a checkerboard with an overlapping field of view, forming a closed loop with perfect stereo-camera calibration parameters between each of the camera pairs (as shown below). Although the optimiser can handle any type of sensor, we consider cameras for the sake of explanation.

In order to showcase the working of the algorithm, we synthetically add error derived randomly from normal distribution of varying standard deviation and zero mean to each of the perfectly calculated parameters of the three stereo-camera calibration pairs: Cam1-Cam2, Cam2-Cam3 and Cam1-Cam3. After running the optimization using the Calibration Optimiser tool, we evaluate the performance of the algorithm by plotting a curve indicating the amount of error in Y axis and amount of standard deviation added in X axis. Below are the three graphs for the three calibration pairs where the green bars indicate the synthetic error introduced in each calibration and the red bars represent the amount of error after optimization compared to the originally calculated ground truth. In most cases, calibration error is reduced after optimization. There are a few rare cases where optimization increases calibration error because the optimization converges to a solution further away from the ground truth. On average, we observe that an average of 18-20% of the synthetic error was reduced per calibration. After numerous such experiments with varying numbers of sensors, we verified that our algorithm reduces the error by at most 1/N of its original value where N represents the number of sensors in the loop. Note that this result assumes that all calibration errors are independent and evenly distributed among all calibrations.

Talk to us about your AI and Machine Learning projects